Officer in Denton Shot During Traffic Stop Released From Hospital

In Denton County, a police officer shot during a traffic stop was released from a hospital.

According to reports, officer Urbano Rodriguez has been released from the hospital after recovering from gunshots to his head and leg. The shooting took place in late October, and Rodriguez had been hospitalized since early November of last year. Currently, he is planning on moving out-of-state to continue his recovery and begin rehabbing.

Antwon Pinkston has been charged with attempted capital murder as well as aggravated assault on a public servant.

Aggravated assault takes place when an individual uses a deadly weapon to cause serious bodily injury or death to another person. This is according to Texas Penal Code § 22.021.

In the state of Texas, attempted capital murder and aggravated assault carry serious penalties, but these can be exacerbated when a person is found causing bodily injury or death to a police officer. This can be classified as a first-degree felony, carrying maximum penalties of a $10,000 fine and a lifelong jail sentence.

Pinkston will undoubtedly face a consequence for his actions. America provides strict punishments to individuals who have been found guilty of causing serious bodily harm or death to a police officer. Law enforcement officials are public servants, and their purpose is to protect us from threats that cause our communities to feel unsafe. If an individual is found to be guilty of attempted capital murder, they are clearly a threat to society, and they need to be dealt with accordingly. Our law office applauds the work done by officials, and we hope justice is served.

Have you been charged with aggravated assault and you are attempting to dispute your charges? Perhaps you’ve been wrongfully charged or falsely accused of this crime and you are looking for a legal professional to help you build your defense. If you’re worried about your charges, it is important to remember that not every charge has to result in a conviction. Make sure you have the proper defense by contacting The Law Offices of Richard C. McConathy.

Richard McConathy is an experienced criminal defense attorney with decades of experience providing quality defense to citizens of Dallas, Denton, Frisco, Allen, and many other communities in America. If you are someone who has been charged with a crime and you don’t know how you are going to defend yourself in a court of law, our law firm is here to help. Contact us at 940-222-8004 to speak to a legal expert and schedule your free consultation. You can also contact us by visiting our online contact page. Fill out the form and a member of our team will be in touch with you shortly. 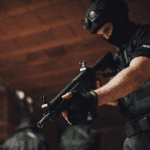